“Fejl 40” (Error 40) is a Danish/Swedish expression normally used among computer technicians or helpdesk workers. It was originally used by technicians who came to inspect a system and then called home to report that the error had been identified as an “Error 40”. It means that the error is positioned 40 centimeters from the console. In this way, the technician could tell headquarters that it was a “User Error” without angering the “stupid user”.

Today, almost everyone in Denmark and Sweden will know that it means the same as the English expression PEBCAC (Problem Exists Between Chair And Computer). I suspect this error is responsible for at least 90% of all “computer errors”. 😉

Most people know that Germany during World War 2 built a battleship called Bismarck, and have heard about her short career and dramatic end.

Fewer people know that the Bismarck had a sister-ship called Tirpitz. But it can be argued that the Tirpitz had greater influence on the war than Bismarck. 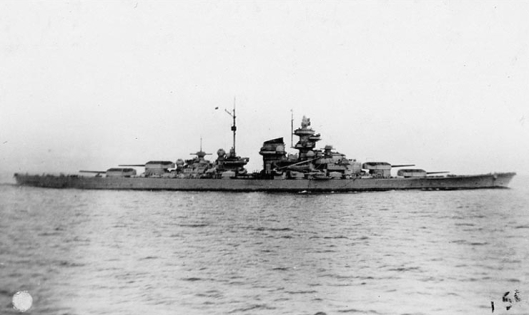 The Bismarck departed Gotenhafen, Germany on May 19, 1941. On May 24 occurred the Battle of Denmark Strait in which the British battleship Hood was sunk and the battleship Prince of Wales was damaged and forced to flee. And on May 27 she was sunk in the Atlantic – less than two weeks after departing the homeland. (Actually, recent research indicates that she was scuttled by her own crew to prevent the British from capturing her.)

A short but glorious career!

Tirpitz, on the other hand, served almost four years in the German Kriegsmarine. Like her sister ship, she was completed in early 1941 and trained in the Baltic Sea. During this time, Germany invaded the Soviet Union and Tirpitz became part of the Baltic Fleet designed to prevent the Soviet fleet from breaking out from Leningrad. In January of 1942 she departed for Norway in order to help disrupt the British/American convoys to Murmansk. She remained in Northern Norway for the rest of her active service career.

A sister ship of the Bismarck was of course a major thorn in the eyes of the English navy. The loss of the Hood wasn’t easily forgotten, and after the invasion of the Soviet Union, the English and later Americans tried to help their eastern ally by shipping supplies to them – which could only happen by sailing supplies north of Norway to the northern Russian city of Murmansk. The mere presence of the Tirpitz constituted a serious threat to these convoys and the Western Allies tried repeatedly to sink her, either bombing her from the air or sailing into the Narvik Fjord in miniature submarines and attaching mines to her. The attacks repeatedly damaged the ship but failed to sink her until, finally, in November 1944 the Royal Air Force managed to destroy her. Between 950 and 1200 (the numbers are uncertain) men lost their lives when she capsized. 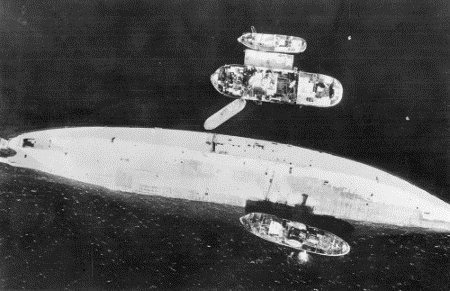 But in the meantime, her mere presence in Norway had seriously disrupted the Murmansk convoys. The worst example (from an Allied point of view) came in July 1942 when the Tirpitz was launched to attack the PQ17 convoy. Several other German ships struck uncharted rocks and had to return for repairs, and in the end none of the German surface ships reached the convoy. But the threat of having to fight the Tirpitz had made the Allies order their escort ships to leave the convoy, leaving the 34 merchant ships at the mercy of German submarines. Only 11 of these 34 ships reached Murmansk. Tirpitz’ presence as a “fleet in being” had destroyed almost an entire convoy of much-needed supplies to the Soviet forces.

Ironically, the Tirpitz never fired her main cannons at another ship. The only time they were fired “in anger” (i.e., in combat) was against Allied positions on Spitzbergen in September 1943.